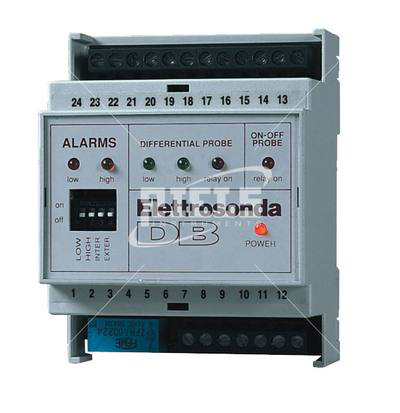 The electric probeDB with 5 control points is widely used for controlling the level of liquid conductors, for the alarm signal overflow, too empty or against dry running.
DB is a highly innovative product that brings together in a small space (4 DIN modules) a series of functions.
The level control with the conductive method is used only with conductive liquids.
This method detects the closure of an electrical circuit when one of the electrodes which characterize the system of measurement is in contact with the process fluid. A probe covered closes the electrical circuit formed by the electrode, from the liquid and, in general, from the vessel wall, if it is conductive.

In the event that this were constructed of insulating material is instead used a second probe which counterelectrode.
It is a simple system with relay output, low cost, also suitable for the control of multiple points of intervention.
It can not be used if the probe can become coated with grease or other substances electrically insulating or in the presence of liquids which have a conductivity strongly variable. To avoid oxidation of the probe caused by the electrolysis the measuring circuit is fed with an alternating current rather than continuous.
The switches have a standard resistive field of adjustable resistance and the output supplied to relay.
Through the second probe is possible to realize the control between multiple points, for example to control pumps where the switching occurs only when both probes are respectively covered or uncovered, where the control interval is given by the difference in height between the ends of the two probes.